A Rioja legend in its own lifetime: Roda's 30th anniversary tasting

Clams and Galician blond breed beef (Rubia gallega) at Asador Etxebarri, where everything is grilled over wood fires, using different woods. Roda owner and founder Mario Rotllant isn't afraid to serve his red wines with fish and seafood. Or, for that matter, with desserts

Three decades is both a long time and a short time in the life of a wine producer starting from scratch and aiming for the stars. Thirty vintages is not a huge number, bearing in mind that it means fewer than 30 finished, ready for drinking wines. On the other hand, it’s long enough for demonstrable results and for future potential to be gauged (or guessed at). Long enough, too, for an incomer who did things differently and whose initial wines were often considered questionable – good wine, but not proper Rioja, said detractors – to find that he has moved from the fringe to centre stage, his ideas adopted by others and his wines regarded as new classics. So it is for Bodegas Roda, celebrating its 30th anniversary this year.

When Mario Rotllant founded Roda in 1987, with his then wife, his object was simple: to make the best possible wine, by doing the best at every step from terroir to bottle, irrespective of cost. He was motivated by seeing the quality produced by top wineries in other countries (whose wines he distributed) and feeling that Spain’s top tier was not of the same calibre. He decided to try to make something he deemed worthy of the Spanish wine industry.

Having looked at various regions – he’s from Barcelona – he decided on Rioja: “the best area and the best known worldwide”. He then assembled a young team who, he says, “had a lot of experience but were not conditioned by Rioja. I thought it was healthier to start from zero.” A further challenge for the team was that the wine was to be enjoyable young, unlike top Bordeaux of the era, but also capable of ageing. To Rottlant’s credit, the core team at Roda has changed little and, he says, is still “looking for perfection continually”.

Grapes come from 17 vineyards: Roda owns 70 hectares and manages a further 50ha. The sites have changed over the years (one of the most emblematic was uprooted by the farmer), but they remain centred on the sandstone soils of Haro and the surrounding Rioja Alta villages, where there is a confluence of three climatic influences, Atlantic, continental and Mediterranean. Other features of viticulture and winemaking were also cast early on. They include traditional gobelet bush vines, dry farmed and over 30 years old; rigorous grape selection (Roda was the first to use a sorting table in Rioja); minimal intervention in the winery, including spontaneous alcoholic and malolactic fermentation in oak; vinifying the wines from the 17 vineyards individually and keeping them separate until after they have been aged in French barriques for about a year; not blending in wines from any other vintage (the DOCa regulations allow up to 15%).

When it comes to the assemblage, the wines are tasted blind and those identified as having black fruit characteristics go to Roda I and those with red fruit characteristics are assigned to Roda (called Roda II until the 2002 vintage). Sela, first produced in 2008, is made from 15 to 30-year-old vines. Cirsion, the pinnacle of Roda, is made from vines selected specifically for the high degree of tannin polymerization in the grapes, making it an individual vine selection, rather than a single vineyard. It can only be produced if the conditions through the growing season are right. Since the first in 1998, there have been 13 – none, for example, in 2013 or 2014.

The view from Asador Etxebarri, deep in the hills of the Atxondo Valley

The main tasting was a comparison of three pairs of consecutive vintages of Roda I, one pair from each of three decades and all vintages officially classified as excellent. Lunch followed with three further vintages. The venue was Asador Etxebarri (number six in The World’s 50 Best Restaurants at the time and now number three), set deep in the hills of the Atxondo Valley 40 minutes’ drive southeast of Bilbao, where everything is cooked on wood-fired grills. The three vintages chosen for the bold and variously smoky flavours of the fish-based menu were what Roda calls Atlantic vintages – “and not the good ones, but the difficult ones”. Bodegas La Horra Corimbo 2012, Roda’s Ribera del Duero, was then served with steak (Galician blond breed, aka Rubia gallega) and we finished with Cirsion 2015 with a chocolate dessert (mignardises and cocoa). Scroll down to the bottom for the menu.

A very dry vintage: the vines had to work hard, but remained healthy throughout. Tempranillo with, unusually, almost 15% Garnacha. 16 months in French oak, one third new, second and third fill. Younger looking, less garnet, than the 1995. A long succession of aromas: blackcurrants, red fruit, minerals, black olive, liquorice, cedar, fresh spices and a touch of bloody meat; expressive, but more brooding and darker than 1995. The palate is intense and long with a red-berry coolness and spiciness, dark chocolate and mineral freshness. If there’s a suggestion of austerity to the flavour, it’s redeemed by the fine tannins and meltingly tender texture.   93

Very different from 1994. An easy season with 25% more rain delivered evenly through the season, but it was not without its traumas. October heat caused some fermentations to stick temporarily. A more exuberant, expansive, voluminous wine: riper, richer and more fruit-forward on the nose, with chestnut sweetness and fruitcake spice, rather than the cooler cedar of 1994. Black fruit including cherry on the palate, and creamy vanilla oak adding sweetness. The same oak regime as 1994 but, with the sweeter fruit, slightly more showy here.   94

An unpromising season, with rain, summer hail and signs of botrytis, until redeemed from September 11 on by a drying north wind, high daytime temperatures and cool nights. By 2004, oak maturation had been reduced to 14–15 months, but 40% new. A lovely, fresh, floral perfume drifting over ripe black fruit – berries, figs, fig jam – delicate vanilla cream and sweet minty freshness. Intense, spicy, dark fruit on the palate (cassis and black plum), with a silky, cappuccino-like texture and flavour, then a reprise of crunchy blackcurrant and a savoury, fresh mineral note. Long and fine-boned. Managing director Agustín Santolaya speaks of an Atlantic feel.     94

A model, Mediterranean-type year with very low rainfall (393mm during the vine cycle). Marginally deeper colour than 1994 and altogether bigger and richer. Great concentration of dark fruit on the nose with some higher-toned sweet spicy notes. Mouthfilling, ripe fruit – some red berries as well as black fruit – dark chocolate, mocha and liquorice. Succulent, fine tannins.  Perhaps this is more impressive in its intensity and density than 2004, but I loved 2004’s grace and floral finesse.   94

An exceptionally dry, Mediterranean year (387mm rain during the vine cycle) harvested 15–20 days earlier than 2010.  Powerful, ripe black fruit on the nose, but still quite youthful, tight and compact, whereas the palate is already voluptuous and voluminous, with creamy richness, a mass of black fruit and sweet spice, rather than the pepper of 2010. The oak flavours are still integrating, but the tannins are fine and supple. Great length. Not yet released (although it could be drunk with pleasure).   94.5

A strange year: a very late harvest from healthy vines after an exceptionally dry winter (77mm rain) followed by a sodden spring (440mm rain, 250mm in May alone) then a terrible, cold but dry summer. The colour is still vigorous. On the nose: black fruit and a marked saline, smoky character. On the palate: streamlined, precise, silky and fresh with hints of game and barbecued meat. More restraint and less volume than riper vintages, but finesse instead. Went well with food, especially a smoky tomato and bonito dish. 92

A very difficult year with 15 days below 0ºC and a devastating April frost, but Agustín Santolaya believes they made a very good wine. My glass was largely sediment (and no replacement was forthcoming), so my impression of mellowness, roundness, sweet spice, fruitcake, dried fig and some meaty fuzziness should be taken accordingly and I haven’t given a score. Despite the slurry, it appeared to be a good match for the prawns from Palamós. NS

Prawns, squid, mushroom and aubergine, egg with ceps _ and not a white wine to be seen

Another very difficult year, but at 20 years old it’s a beautifully resolved wine. A subtle floral note plays over sweet, gamey, leathery and spicy aromas and there’s a salty, mineral freshness that reappears, together with the floral note, at the end. It doesn’t have the fat and intensity of riper years, but it has length and definition. The tannins have all but melted away, leaving a lingering fruitcake, balsam and polished leather sweetness and the floral, saline freshness.   93.5 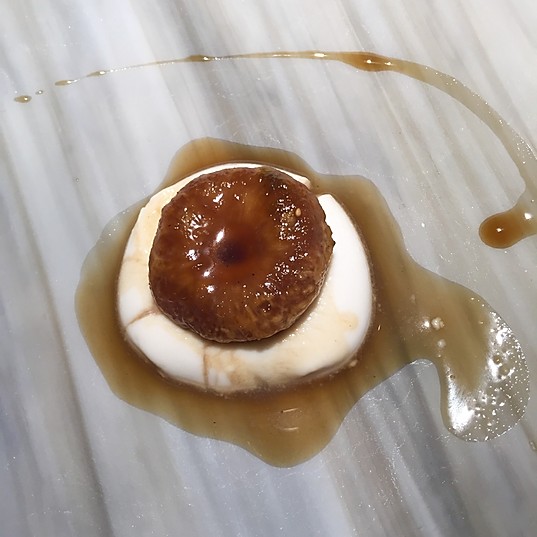 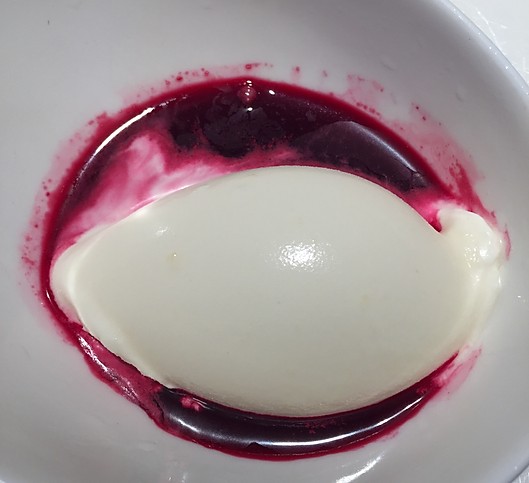 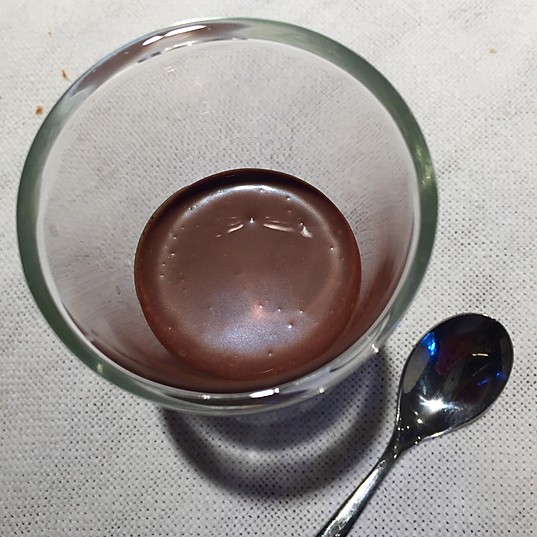 Sipping Siepi with the best of 'em

A Story of Redemption: Castello Banfi in Montalcino

A Pit Stop with Pedro Parra in Chile