Above: Iberico pork, ajo blanco, boquerón anchovies, eggshell and cinders by Michael O'Hare. The edible eggshell was made from egg white, lactose, oyster juice and garlic powder painted over balloons and hung on a washing line for two days to dry. Easy when you know how.

I once flew to Australia for three days. The round-trip took six days and everyone said it was madness. Maybe it was, but, boy, it was worth it. I flew in – guest taster from Europe – to taste every vintage of Grange and Penfolds’ other top wines at one of their rare Rewards of Patience events (read about it here).

A round-trip from France to Leeds recently wasn’t as drastic, but there was a flicker of the same madness, when, soon after arriving in southwest France from London, having taken a circuitous route via Alfred Gratien in Champagne and The Wine Society in Montreuil (read about it here), I flew back to the UK for two days, clocking up four airports, six train stations and various car journeys, tubes and buses. Purpose: lunch. Yes, lunch. In Leeds. But – familiar words here – boy, it was worth it.

The event was the oddly, but aptly named Krug x Egg. I always find Krug invitations hard to turn down (if you’re into emojis, add your winking face here), but this was doubly, even triply, hard to refuse. It was lunch at The Man Behind The Curtain with chef-proprietor Michael O’Hare (left below) – but not only O’Hare. He was sharing the cooking with Torsten Vildgaard (right) of Studio restaurant in Copenhagen. Both chefs, who worked together at the legendary Noma, have one Michelin star. By the end of lunch, I was beginning to feel their two stars added up to more than the sum of the parts. (Good food has that effect on me. That and Krug.)

To explain the title of the lunch: Krug chooses a single ingredient each year, an everyday ingredient, not a luxury, that Krug’s ambassades chefs around the world use to get creative. This year it’s egg, last year it was potato.

And so to a fashion store in Leeds. Beat a path through the ground-floor men’s wear to the lift. Ascend, passing men’s casual wear on the first floor and women’s on the second. Step out on the third floor into a light and airy cross between a warehouse and a studio, with a long bar and walls decorated graffiti-style. And there’s the Man himself: a shock of blonde hair (Boris-style but younger), tattoos (of course), dressed in black except for the silver boots. And there also, quietly, is a smiling Vildgaard, neat in chefs’ whites.

Lunch. Let’s get the Krug element sorted out first. We drank Grande Cuvée, Krug’s flagship multi-vintage, throughout. It wasn’t a hardship. It went better with some dishes than others, but basically partnered the 10 savoury dishes with complete confidence. (It didn't go with the desserts, but I wouldn't have expected it to and I don't suppose anyone did.) Very few other Champagnes, if any, could do the same.

The current cuvée has 2007 as its base wine and is a blend of 183 crus spanning 12 years. Complexity is an overused in wine, but what else can you say? We also had, with the octopus, a Grande Cuvée based on the 2000 vintage that had been brought over from the cellars in Reims recently. It was deeper and richer in honey and brioche flavours, but still beautifully fresh. As for the food and how the two chefs divvied up, they each created their own dishes and delivered them to different tables in varying order, so the menu (above) is a list of dishes but not a running order (it’s not the greatest photo – taken at the table – but I can’t re-take it because I scribbled notes on it as lunch progressed).

O’Hare produced seven dishes and Vildgaard five – plenty to appreciate the differences between the two chefs. It’s a bit clichéd, but their cooking styles really did seem to reflect their personalities: O’Hare – flamboyant, extrovert, showy, daring, elaborate; Vildgaard – more measured, minimalist, understated, subtle, less is more. You can see it in the photographs: these, accompanied by the menu, tell you pretty much all you need to know, although there are a few typos to clarify: third down, it was beef tartare with piso (‘pea miso’, not pesto); fourth down, the veal sweetbread slider was with a sriracha steamed bun and the shiitake was pickled (not picked); seventh, I like the idea of a ransom, but it was ramsons.

Beef tartare with elderflower piso ('pea miso', not, as the menu says, pesto) and oxalis;

Potato chip with smoked rose and aromatic plants (as you can see the 'chips' were nest-like).

Clockwise from top left above, the first three dishes by Michael O'Hare:

Denia red prawn, scorched head juices; Veal sweetbread slider in XO sauce, sriracha steamed bun, pickled shiitake. This was some people's favourite dish and match. I found it just a touch too sweet for the Krug. 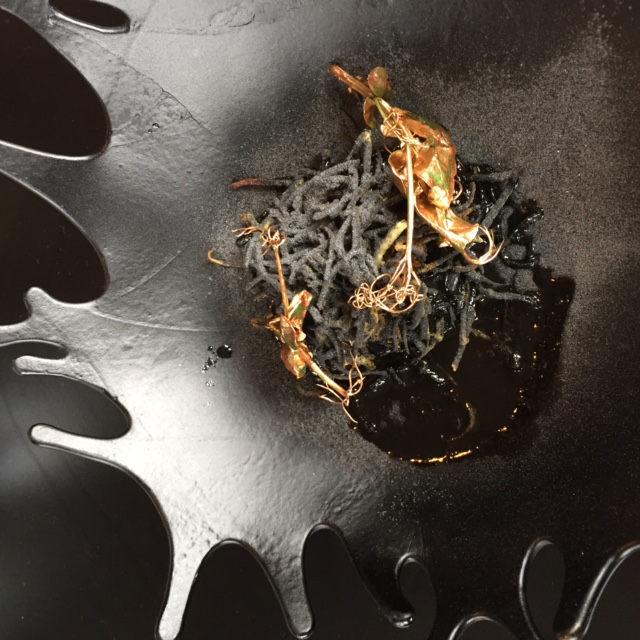 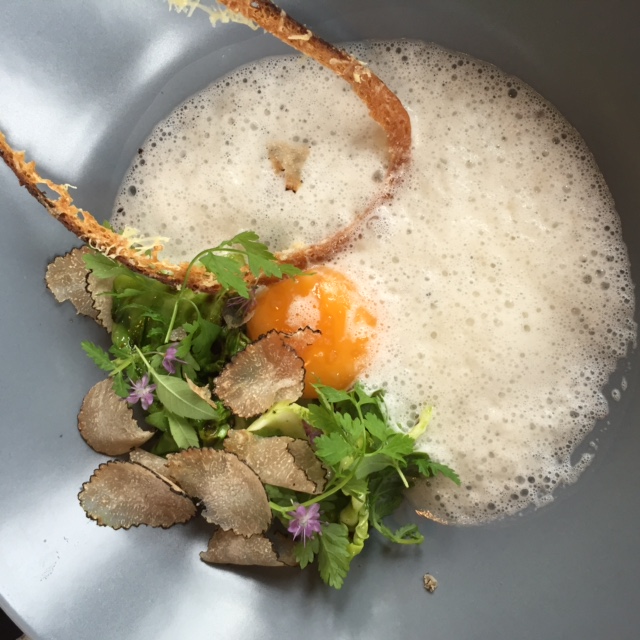 What you don’t need to know is whether I preferred one chef's cooking over the other's, but I’m going to tell you anyway because our table was conveniently even-handed when we took an impromptu unofficial vote: two votes for O’Hare and two for Vildgaard. It was very hard to choose, but I came down in favour of Vildgaard. I liked the outward restraint that hid so much depth and I liked the clarity of the flavours, but for sheer bravado and inventiveness O'Hare wins the day. As a double act – well, perhaps they should do it more often. Start queuing now.

While we're looking at the silver boots (left), a word about the egg-yolk yellow loo paper (top): I think it was the restaurant’s standard issue, rather than something Michael O’Hare got in specially for the Krug x Egg lunch, but who knew? And as there’s a waiting list of a year for The Man Behind the Curtain, I shan’t be going back to find out anytime soon. Sadly.

All photographs by Joanna Simon

Sipping Siepi with the best of 'em

A Rioja legend in its own lifetime: Roda's 30th anniversary tasting

Girls' Night: who'd have thought it...